The hidden camera is the bread and butter of law enforcement surveillance equipment. Being able to see what a suspect is doing is more important to an officer on the case than just about anything except being able to hear what they’re talking about.

One way a police officer might gather information is by using covert video cameras. Small and inconspicuous enough to hide in a room or vehicle, hidden cameras are one of the most common pieces of police surveillance equipment. They can be used when police manage to gain access to a vehicle or building that they know a suspect will use for criminal activity. For example, police can catch a drug deal by positioning a tiny camera to observe a hotel room by drilling a small hole in the neighboring room. Sometimes, the cops may not have enough time or information to plan this far ahead, this is where the next kind of covert surveillance equipment comes in handy.

When you can’t install a covert camera, bodyworn recorders are a piece of undercover surveillance equipment that might do the trick. Commonly referred to as “wearing a wire” a bodyworn recorder can record audio as well as video if it’s placed correctly. These tiny recording devices are built to be put on a person and are most useful when the cops have an informant or an undercover officer. Data can either be recorded for later, in the case of a closed circuit recorder, or transmitted live via radio frequency.

When you can’t get a camera or a person in the room, you might need some long range surveillance equipment. There are all kinds of cameras and video cameras with telescoping lenses, allowing law enforcement to watch criminals from far away. This method requires a direct line of sight, but it allows the police to spy on all sorts of outdoor criminal activity while remaining out of sight themselves, making this one of the most versatile law enforcement surveillance cameras. 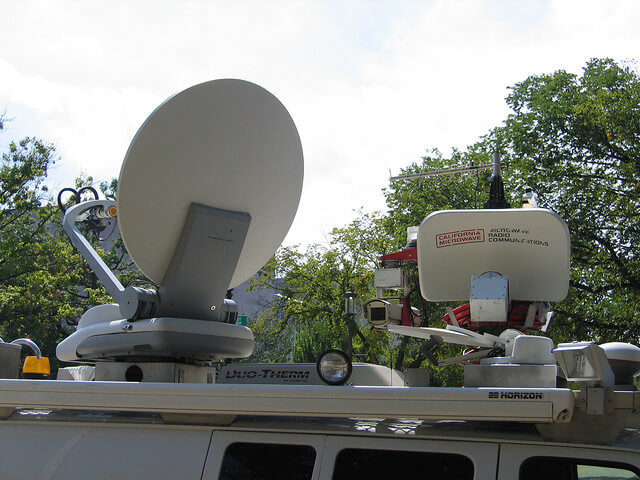 The Surveillance van is one of the most recognizable pieces of police surveillance equipment. You’re probably familiar with the scene from movies and television: police huddled in the back of a van with giant headphones on and cups of coffee in their hands watching a bunch of TV screens. This iconic image might leave you wonder what all that surveillance van equipment really is.

One essential piece of hardware you’ll find in just about any surveillance van is the periscope. Similar to the periscope of a submarine, a van periscope is a device that inconspicuously pokes out of the top of the van and looks around in all directions. It can be moved by a radio controller inside the van and it allows the occupants a 360 degree line of sight.

Other than the periscope, surveillance van equipment is just like the regular law enforcement surveillance equipment that we talked about earlier. Vans can be outfitted with a variety of long range cameras, directional mics and receivers as well as recording devices that catch transmissions from bodyworn and covert cameras. The van allows for a lot of equipment to be housed on one inconspicuous mobile surveillance platform.

Whether they’re squatting on rooftops using long range cameras, or huddled in a van watching a feed from a bodyworn camera, you can rest easy knowing that the police have all kinds of undercover surveillance equipment at their disposal and they’re using it every day to keep you safe. Misdemeanor and Felony Expungement
Want to Speak to a Private Investigator? Start My Consultation